In this tutorial, I’m going to show you how to record a digital whiteboard video where you’ll record yourself writing or drawing on screen.

Including digital whiteboard techniques in your video is a great way to make your videos more interesting and to engage your students. You can draw on a blank white background, include a custom branded whiteboard, or annotate images in order to demonstrate something.

The are 4 things you need :

Watch the video below, then continue reading.

The first thing you need to record a digital whiteboard is some sort of digital drawing device. If you already own a computer or laptop, the best option is to buy a digital drawing tablet, like the Wacom Intuos S

Perfect drawing tablet if you already own a computer. This will allow you to use the included pen to manipulate your mouse cursor.

A drawing tablet is essentially a mouse device that is controlled by a special pen. When you tap the pen to the surface it acts as a “left-click”, but it also senses the position of the pen just by hovering over the surface. So, it tends to feel really natural when you’re using it.

They also have pressure sensitivity built into them, so depending upon how hard you press the pen to the surface, the darker the line will show up. The pen has a couple of buttons on the side that you can assign to different actions as well. I have been using Wacom drawing tablets for 5-6 years now, and they still work great. I’d recommend getting the Wacom CTL4100 Intuos ($80 Amazon).

The only drawback to these types of drawing tablets is that you have to look up at your screen while you write, so you need good hand-eye coordination. Wacom also makes several drawing tablets that have screens built-in, so you can directly see what you’re drawing, but if you’re going to spend that kind of money, I’d recommend getting a Microsoft Surface Pro instead.

The Surface Pro is like the jack of all trades of devices. It’s a tablet, but when you connect its keyboard, it’s also a fully functional laptop. The best part is it runs Windows 10, so any program you can run on your desktop computer, you can run on this. It’s not like a simplified Android or Chrome operating system, it’s full-blown Windows! I love this thing.

The best option for a tablet that you can draw on. You’ll need to get a compatible pen to go with it. Save some money with an aftermarket pen.

Once you have a drawing tablet, you’ll need to decide which drawing program you want to use.

You can use nearly any program that allows you to manually draw in it. Photoshop, Paint 3D, Gimp, Powerpoint, are all programs I’ve used to do this. Here are my top recommendations:

For Windows users, Paint 3D is a great program to use for digital whiteboards. In addition to the nice selection of drawing tools, you can also insert 3D models from the free 3D library. You can orbit them around, then annotate them in 2D.

I love the simplicity of Microsoft Whiteboard. It works extremely well with my Microsoft Surface Pro. One thing that’s cool is you can have multiple people connect to a whiteboard for live collaboration.

SketchBook is a professional drawing program built specifically to be used with drawing tablets. It has a very easy to use interface, and it looks great. It’s free! (That’s what I use) You can download it at https://www.sketchbook.com/desktop (They also have a mobile version which is pretty fun to play around with too!)

Once you have SketchBook installed and opened, you can pick a brush to use. For digital whiteboards, I like to use the felt tip pen at a size of about 5. I like the balance between heavy line weight and soft edges that combination has.

You also have the ability to import images onto the canvas. This is great if you have a custom background you want to draw on, or if you want to annotate a specific image in order to demonstrate something. Just go to File > Add Image. Then, tap ESC to close the Move tooltip.

This is your “whiteboard”, where you’ll be drawing on your screen, now you’ll need to record your screen. It’s really important to make sure your canvas is zoomed to actual size, to prevent any pixelation in your screen capture.

There are many things I like about Camtasia, including the fact that you can choose a preset aspect ratio, full screen, or lock to a window. You can also record a web cam and microphone at the same time as the screen.

Another free option for screen recording is OBS. It’s a pretty powerful program, but not as simple to use as Camtasia.

There are a few different scenarios you might find yourself recording digital whiteboard. A common misconception is that you must record your digital whiteboard along with your audio in real time. But in most cases, you’ll find it easier to record them separately.

1. Real-time recording of audio and whiteboard

Recording your audio and screencast at the same time might seem like the most logical and straight-forward solution for creating a whiteboard presentation. After all, that’s how all of our teachers in school do it, right? They would draw on the board during the presentation of the days’ lesson.

Many of the videos at Khan Academy take this approach, and they do a good job of it. But, in my personal experience, I find myself shying away from this approach (especially when I first started out) for a few reasons:

If you find yourself overwhelmed while trying to record audio and draw at the same time, don’t worry, there are some other methods you can use to make it less stressful.

In most situations, you don’t need to record your whiteboard at the same time you record the audio. The pace of speaking and writing rarely match up, and you’ll almost always need to transition between new canvases to illustrate new points, which requires post production editing anyways. For instance, when I recorded my tutorial on setting up a WordPress site, I recorded video and audio of me talking, while sitting at my desk. Next, I used Adobe Premiere to edit the video and cut out the junk in order to make a complete, concise tutorial. I essentially completed all the post production on this video before even thinking about digital whiteboard.

At that point, I reviewed the video again and identified some areas where I thought I could use digital whiteboard in order to illustrate my point a little better. One example was when I was describing how exactly hosting works, I wanted to illustrate some servers, and how they deliver your site all around the world. So I wanted to draw some files, then some arrows pointing to a server, then have some more arrows point to the earth, then have an arrow wrap around the earth as if to show that your web site is accessible all over the world.

Once I had this idea in my head, I started recording the digital whiteboard. I didn’t worry about timing, or pace. I just drew what I wanted to draw. If I messed up, I hit undo. All of this is going to be edited in the video editing software (Cut out the mistakes, increase the speed to match the audio), so there’s no need to stress out about getting it right the first time, or drawing really fast to get it done at the right pace. Take your time, enjoy it, and have fun!

A hybrid approach to recording whiteboard is to record your audio and your whiteboard simultaneously, but leaving silence as needed in order to give yourself enough time to finish drawing. Then, in your video editing software, you can take the silent part of the clip (where you’re finishing up a drawing), and increase the playback speed to reduce the amount of dead space in the final video.

When you’re recording audio and whiteboard at the same time, make sure you give yourself enough time between phrases to finish writing. Don’t feel like you need to talk while you’re writing just to fill in dead space. Just finish writing/drawing, and you can speed up that clip of video in post production.

The biggest challenge with this approach is keeping your train of thought in between the silences, and maintaining the same vocal intensity and rhythm throughout. 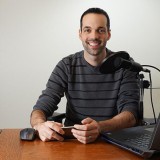